Construction to begin on a $1.9 billion widening of the I-405 freeway in Orange County 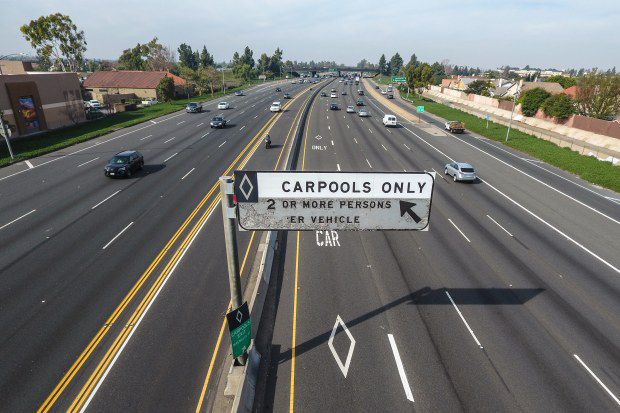 A decade of planning for an ambitious widening of the I-405 freeway will soon give way to construction – kicking off five years of roadwork that transportation officials say will ease gridlock, ultimately, on one of the busiest routes in the nation.
“That corridor is one of the most heavily congested corridors in the nation,” said Ryan Chamberlain, director of the Caltrans district that covers Orange County. “(Driver’s) are sitting in stop-and-go traffic, wasting time looking at tail lights instead of moving to where they need to be.”
With it’s $1.9 billion price tag, the undertaking marks the largest project in the Orange County Transportation Authority’s history, as well as the largest active freeway project in California.
The result will be a new freeway lane in each direction, for the 16 miles between Euclid Street in Fountain Valley and the I-605 in the Seal Beach area. Once completed, the existing carpool lanes on that stretch become express lanes – requiring drivers using them to carry passengers or to pay.

Darrell Johnson, CEO of the Orange County Transportation Authority, said the end result will be “the freeway of the future.”

“It will have capacity, it will have more lanes, it will take into account the interaction between the freeway and local streets,” Johnson said. “You are going to have a choice, you are going to have reliability.”
But all of this comes with a cost, besides money – for more than four years, commuters must wend through a construction zone.
“I would just ask the public to have faith and confidence in us,” Johnson said. “The end result will be worth it.”
Construction ramping up

In the coming weeks, expect to see concrete barriers sprouting along parts of the I-405, along with construction worksites popping up, said Jeff Mills, the project’s program manager. Later in spring, re-striping will begin so drivers can be shifted toward the freeway’s middle, allowing grading and the removal of trees to the freeway’s sides.
In late summer, the heaviest impacts to commuters will begin to break out – demolition and reconstruction of the bridges so the extra lanes can fit beneath them. At least 18 bridges where city streets cross over the freeway along the way must be re-done.
Lane closures will be limited to overnight hours, officials said, so during the day local traffic will get hit the hardest as some streets are blocked off.
“There will be four-plus years of some challenges for commuters,” Chamberlain said. “But if we don’t do this, commuters will suffer with ongoing congestion for years to come.”

The 405 Freeway looking north between Talbert Avenue and Brookhurst Street in Fountain Valley. Transportation officials are getting ready to hold a groundbreaking ceremony for a multi-year, I-405 widening project that would add one express lane and one regular lane from Euclid Street to I-605 at the Los Angeles County line. (Photo by Jeff Gritchen, Orange County Register/SCNG)
Along with the traditional getting-the-word-out strategy, transportation officials are going high-tech to lessening the impact.
The OCTA will supply the popular cell-phone app Waze with information about official detours – hoping to keep drivers from taking impromptu detours through otherwise quiet communities.
“Waze can be controversial, since it often sends people through residential communities,” said Christina Byrne, community outreach manager for the I-405 project. “Knowing that ahead of time, we contacted them to see what we could do to mitigate that. Our closures and detours will come up first.”
The OCTA is also developing its own app for the project, along with a web page. Both will provide information about the I-405 construction and street closures.
Extra California Highway Patrol units will be dispatched to the construction zone. Construction on the bridges will be staggered, to minimize the impact. Detours are to be well thought out.
“We want to be careful to provide good alternate routes during construction,” Mills said. “Nothing, frankly, frustrates the traveling public more than getting sent on a detour to another work zone, and that is what we are trying to avoid.”
New toll lanes
During the busiest times on the freeway, it already takes up to an hour to travel the 16 miles. If these improvements weren’t on the way, officials said, that trip time could have eventually doubled.
Instead, officials estimate that freeway drivers and their passengers will make the rush-hour journey in 29 minutes – with those willing to pay to enter the express lanes getting through in about 15 minutes. What the tolls will be hasn’t been decided.
Cars and trucks with three or more occupants will be able to use the express (toll) lanes for free. For the first three and a half years, vehicles with two occupants can travel through the toll lanes for free during non-peak hours.
Express lane drivers must carry transponders, even if just switching the device to indicate they have enough passengers to glide through for free. CHP officers will be on the hunt for violators.
About $1.1 billion of the project’s cost will come from Measure M, the county’s half-cent sale tax for transportation improvements. The federal government will chip in $45.6 million, while the state will kick in $89.7 million. A low-interest loan for $629 million is to be paid off by revenue from the express lanes.
The OCTA would operate the express lanes, such it does with the 91 Express Lanes that run the middle of the 91 freeway. OCTA consultants estimate that the express lanes will get 13.9 million trips the first year, a figure rising to 20.3 million in the third year.
A long road
The road to construction has at times been bumpy.
Both the cities of Long Beach and Seal Beach filed lawsuits challenging the project, contending that it would cause a bottleneck at the Los Angeles County line.
Long Beach reached a $13 million settlement with Caltrans and the OCTA, money that will go toward improvements on Willow Street, Los Coyotes Diagonal, Bellflower Boulevard, Seventh Street and Pacific Coast Highway. The Seal Beach litigation remains active, although OCTA officials say they don’t believe it will slow down construction.
““We all had to roll up our sleeves and work hard (for) something we could all agree is the right project for this corridor and the residents,” Caltrans’ Chamberlain said.
The OCTA is still working on acquiring private land needed for construction; officials say they don’t need to take homes or businesses through eminent domain.
“This is probably the last widening we will do on the 405 in this segment, so we need to maximize the improvements in one fell swoop,” the OCTA’s Johnson said. “We fully understand that construction is never easy, never a good neighbor, and this is going to be the largest freeway project, not only in Orange County, but in California over the next few years.”