HOW DO TRENCHES COLLAPSE?

What does all this have to do with you? It is information vital to work in accordance with shoring safety standards. More importantly, it is vital information if you are digging a trench and want to protect yourself and coworkers from a trench collapse. Classifying soil type is a large part of safety compliance. One of the first questions you should ask regarding the soil at a trench site: “Is this sandy soil?” or “Is this clay soil?”. No matter how you form the question in your mind, the fact is this: the protection of life and health as it concerns trench safety begins with proper soil classification. The type of protective equipment needed to protect workers in a trench is determined in great part by the type of soil encountered together with the depth of the excavation. 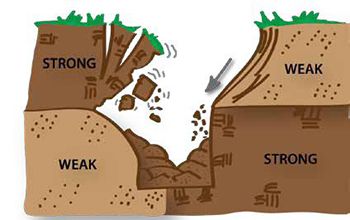 The above graphic illustrates two different trench collapse scenarios. The left side depicts a “strong over weak” shear failure in which the top layer will collapse over the weaker bottom layer. The second, “weak over strong” shear failure finds the weaker top layer caving into the trench. 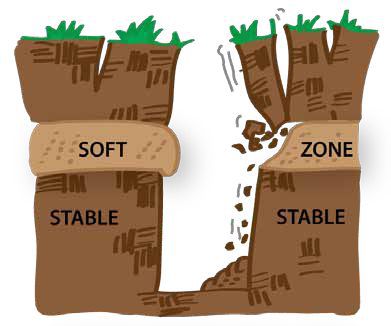 This graphic depicts a trench collapse caused by a soft zone failure. The soft zone is a layer of soft soil, sandwiched horizontally between two layers of stable soil. The soft zone causes the top layer of stable soil to have a weak foundation, leading to collapse. The introduction of water to a stable trench can undermine the soil, creating a soft zone. Soft zones also occur naturally over time as soil layers are formed. 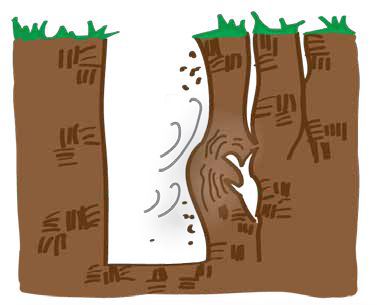 Sloughing occurs when a trench wall becomes so dry that it creates a weak area. Wind blowing into an open trench is a common cause of sloughing. This weak area cannot support the weight of the soil above and will eventually cause the trench to collapse. 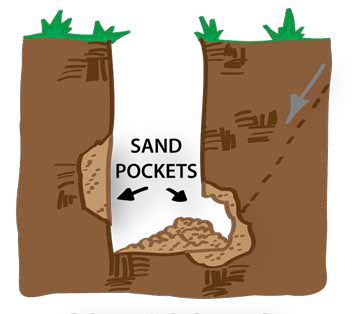 When an area containing varying soil types is trenched, soft pockets may be encountered. While the trench walls consist of mostly stable soils, soft areas of sandy soil are exposed at depths under the surface. These soft, sandy areas are weak spots and will cave in, creating a void beneath more stable soils. Gravity and time will combine to fill the void by way of a trench collapse. 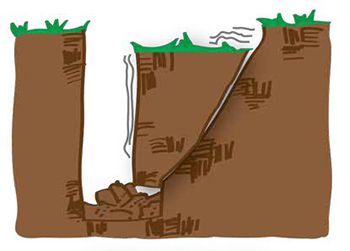 One of the ways that the void will be filled by a wedge failure. A large section of the trench wall will collapse by sliding down the shear failure surface and into the trench. The wedge failure begins as fissures along the surface of the ground. Gravity then acts to create a fracture that continues from the surface down to the area of the void, causing the wedge of soil to collapse into the trench in an angular fashion. 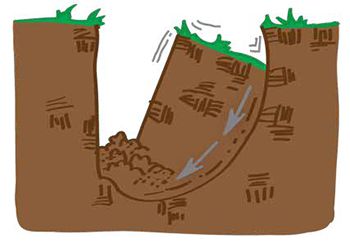